Let’s travel to the jungle of the African King slot game and hear the roar of the true King of animals! African King is a slot with kind-of-classic gameplay and some modern features to make it more spicy. The gameplay includes both regular and wild symbols and the Bonus Feature starts with a click-and-peak to reveal more Free Spins. 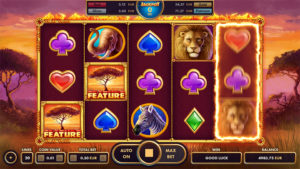 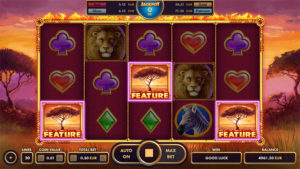 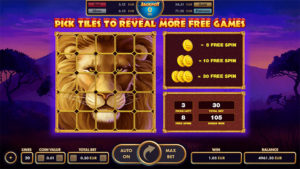 Roam the majestic savannahs in your quest to become the king. Welcome to Africa.

In what feels like the next best thing to actually going on a safari. African King welcomes players with some of the most magnificent animals on the continent. Lordly lions, elegant elephants, and gigantic giraffes parade across the five reels and 20 paylines in the game. The solitary purple acacia tree that is an everlasting symbol of the savannah’s flora acts as the scatter. Hitting 3-5 of them on the reels initiates a bonus round, while 2-3 are enough to award the player with Free Spins or Re-Spins.

Players are awarded 8 Free Spins initially but still have a chance of getting more from the pick-a-box feature. By selecting 3 to 5 tiles, players can add between 1 and 30 additional Free Spins. If there are only 2 Scatters on the screen, all remaining reels will be re-spun to get you an extra chance to trigger the Bonus.

Once the Free Spin Feature is triggered, one more special symbol will appear. The walking wild symbol, represented by a giraffe and filling an entire reel, changes its position by moving across the reels. That means that one of the five reels will constantly be wild during Free Spins. With the animals of the savannah actively helping players win, it won’t take long to become the African King.