It's not just a typical classic slot related to China. Dragon Sevens slot has 3 reels and 3 lines and features Wild multipliers x2 and x4, as well as incredible Bonus Feature of Free Spins with a mystery multiplier up to x30! 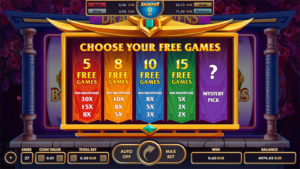 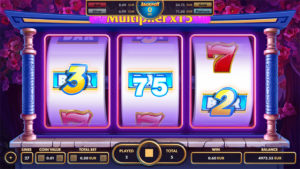 Would you like to play a classic slot game with an Ancient Chinese theme, but in a modern implementation?

Well, welcome our Dragon Sevens slot! Though the world's first slot was produced in America, it was implemented with American national symbols. But we believed that it would be a great idea to make a kind-of-classical slot with an eastern flavor.

This slot has the traditional number of reels for old machines – three. The number of lines is 27. But what makes it have mostly modern slots – there are particular symbols and original Bonus Features. First of all, it is to be noted that there are only two kinds of basic symbols here. Bars and Sevens are mixed.

There is a Wild symbol that looks like a flame, and it replaces missing basic symbols, except the Bonus Scatter. Wild in a winning combination multiplies the payline by two; two Wilds, and it’s multiplied by four. A full line of Wilds brings a win of x83.33 of the bet per line.

Besides, if you get three Scatter symbols (Dragon Bonus symbols), you will activate Free Spins mode. You will be able to choose 1 of 4 Free Spins + Multipliers Packs or to make a Mystery Pick! There are available packs with 5, 8, 10, and 15 Free Spins together with one of the multiplier packs. One of three possible multipliers from your Pack will be revealed with every new free spin.

Let's make something impressive together!

Please leave us a line so we can discuss our partnership in every detail.